Flutter is a modern mobile app development framework that allows developers to make apps for both iOS and Android mobile devices using a single codebase. It’s not the only framework for mobile apps on the market that provides this capability, but it is one of the newer, well-supported, and maintained frameworks.

Although its business community isn’t as large as some of its competitors – namely React Native, it is still a growing community of dedicated engineers and new customers. In this article, we will be diving into some of Flutter’s advantages over other mobile app development frameworks on the market today.

We’ll explore how and why these advantages in building mobile apps make Flutter worth investing in and why it could be the primary framework a company decides to use.

One of the most notable things that give Flutter an edge on the competition is its handle on hot reload times, which is comparatively faster than other mobile app development companies. Secondly, its vast bank of built-in UI widgets and features that ship out of the box and are ready for use allows for speedier development depending on the developer’s skill.

You’ll also find the use of the feature-rich Dart programming languages, which allows for ease of development and native app-like performance, exactly what a mobile app should include. Exploring these reasons will help you understand the benefits Flutter app development offers and what makes it worth the investment.

As a developer working on a mobile app, you’ll want to be able to have your apps reload fast when you create a change and hit save. The longer you have to wait for the change to appear on the screen, either on an emulated or real mobile device, the longer it takes to adjust those changes if they aren’t satisfactory.

Flutter handles this exceptionally well and allows you to hold on to app state between re-renders. Additionally, smoother transitions between changes in app state and animations allow for a better sense of how the app will look to users once it’s on an actual device. And as already mentioned, the hot reload times are more reliable for a mobile application.

Reliability issues are a hurdle that many mobile app developers have had to stumble through for a while. This includes the infamous black screen or even just an app crash that has to restart the mobile app or device. Flutter has made a lot of headway in lowering the occurrences during mobile application development.

Another edge Flutter features come with is the much more extensive built-in library of ready-to-use widgets that come right out of the box. You’ll be impressed with everything they offer right from the get-go.

This allows you to get something onto the iOS or Android app store much faster for companies that don’t have an extensive core of their own custom widgets or components built using another framework.

Plus, most of these other features with built-in widgets can provide a good amount of customizability and flexibility to suit countless scenarios for any operating system, making it super easy for any mobile app developer.

These widgets will adapt to different resolutions, screens, and mobile platforms. You can wrap one widget inside of another to create something specific that you might need or to enable a different set of functionalities or features.

The time required to build something really depends on the mobile app developers' skill and familiarity with the widgets they might need to use, all of which come with front-end programming experience in general and, of course, time spent programming the mobile app in Flutter.

However, even newcomers to Flutter will find its set of custom widgets relatively easy to use compared to other frameworks and app development. Coming from a web apps development background and diving into mobile app development with Flutter, I found it a breeze when searching through Flutter documentation to figure out how to achieve what I need to get done and then make it happen.

The development time to add features to various operating systems was also a smooth transition from my previous native applications used in web apps development.

Lastly, we’ll discuss Flutter’s foundation language – Dart – as something that makes Flutter worth learning and adopting for developing any mobile application. Dart's programming languages are object-oriented and designed by Google for multiple platforms.

It provides a feature-rich standard library, garbage collection, string typing, generics, and async-awaits. It’s very similar to Java but uses popular features other programming languages offer. This makes using the functional aspect of Flutter simple to use for anyone coming from a Java or C background in mobile app development.

With Dart, you get fast execution on any platform because it can easily compile into native code. This makes Flutter one of the top mobile frameworks for speed and performance. In an app world where performance is king, that’s saying a lot about mobile app development.

Flutter is a mature, modern mobile application development framework that has recently come onto the app builders' scene. Its rich set of features alone make it worth investing time to learn about it. Having already explored some of the benefits that Flutter offers, you can easily see the advantages in mobile app development.

It would be difficult to disagree that not only is Flutter worth using and becoming proficient with in general, it’s also worth adopting as one’s primary mobile development framework. It’s open source, allowing the posting of issues and access to documentation incredibly useful.

There’s a powerful community of developers who continuously work on adding improvements and enhancements to the framework. We explored how Flutter has a great handle on hot reload time, which is comparatively faster than the competition.

We then talked about its vast bank of built-in UI widgets that ship out of the box. We also discussed how using Dart under the hood helps developers do what they need to do and provides excellent performance irrespective of platform.

Another benefit we didn’t specifically look at is that with Flutter, you don’t have to be tied to mobile apps but can also make apps for any web browser. So, this brings us to a logical question that many people might be wondering:

Should you or your business switch to Flutter?

Companies with an established set of apps built with a different framework such as React will find migrating over to Flutter an expensive and time-consuming operation. I don’t know whether splitting off and making newer apps and projects for clients using Flutter will cause difficulties down the road.

In that case, you wouldn’t have all your applications sharing the same framework across multiple platforms, so you’d need to make adjustments that could potentially be costly. It’s best to evaluate your business objectives and current situation and make the decision based on your existing system.

For companies that can afford it, choosing Flutter will yield great results, especially in the long run for both your business and your clients. Any business that wants to improve its development time could definitely benefit from using this open source mobile app development framework.

If you haven’t looked into Flutter yet, now would be an excellent time to see if this app design can help improve your workflow. 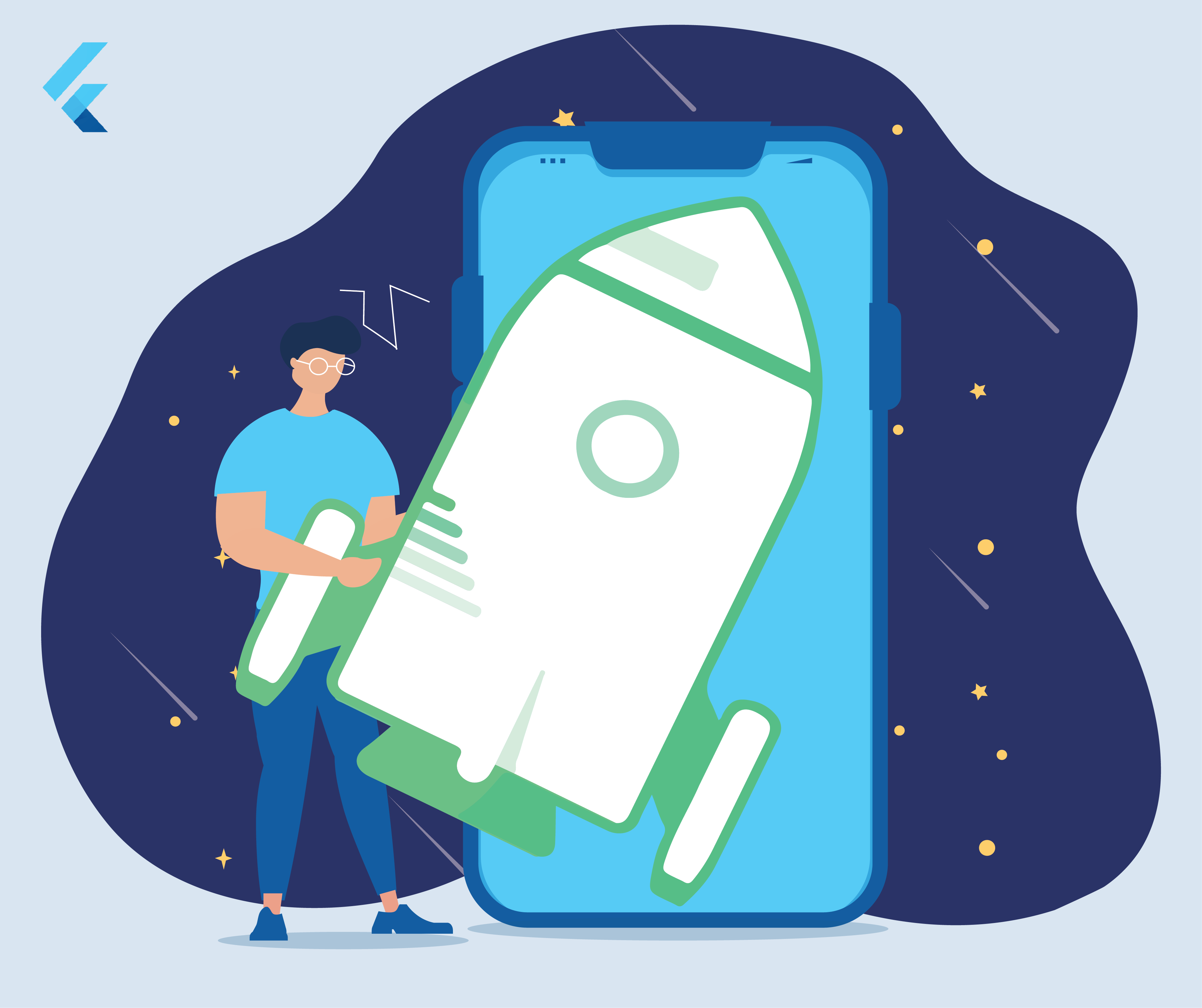 A stateless widget is used when we do not expect the data to change, whereas a stateful widget is for input data or information that will change based on events.

LaunchBadge
By continuing to browse this site, you are agreeing to the use of cookies, whose purpose it is to provide web analytics and measurements of visitor traffic and browsing behavior